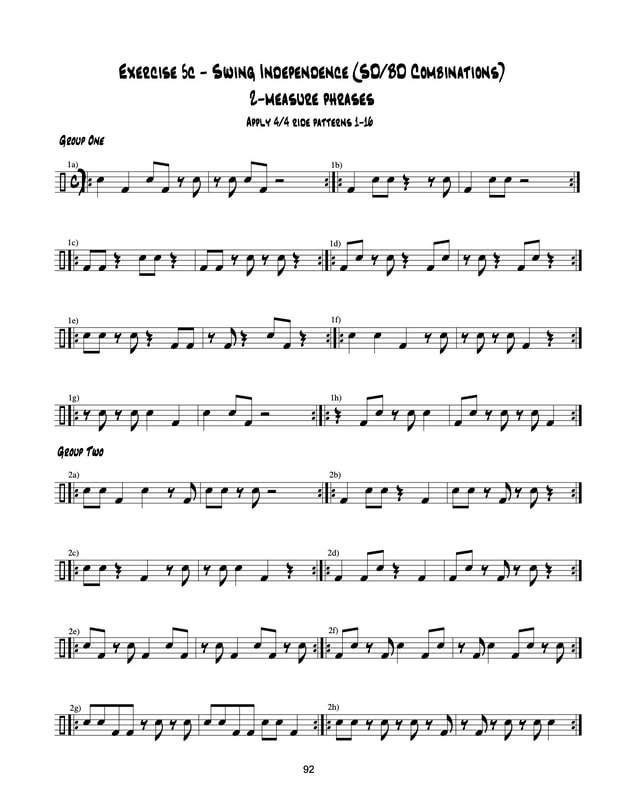 Notes on book use:

This page is a good choice of material to practice over a be-bop tune like Confirmation. The bass drum part can be likened to the "dropping bombs" inherent in the playing of Kenny Clarke and Max Roach in the 1940's and 50's. I chose to play mostly the standard ride cymbal pattern - page 64 of the book includes the ride pattern along with the BD and SD lines. In section II of the book beginning on page 81, the intention is to eventually arrive at a treatment of lines that is fully horizontal in its approach, and the ride cymbal patterns can vary widely - or be random with no set pattern at all. The only "requirement" playing along with a track like this one, would be a strong quarter-note pulse on the ride cymbal.

Dexter Gordon is one of those players who is always swinging! His placement of the 8th-notes in the phrases is a great study in how to comp in a relaxed way. It is "wider" than many of his contemporaries, which leads to a unique, relaxed feel. When playing to this track, it is useful to experiment with this spacing of the 8th-note relative to the downbeats in both the treatment of the lines and the placement of the ride cymbal note just before the downbeats of '1' and '3' - the "ride" note. Another good source for this feel is present in many Clifford Brown/Max Roach recordings.

Dexter Gordon's treatment of Confirmation starts with a short intro of two repeated 4-bar phrases, and then goes right into the head, which is played once (:10-:51). There's some limited interaction from the rhythm section during the head - mainly using upbeat 8th-notes in strategic locations connected to the melody. Then Gordon plays three choruses over the form (:51-2:55). I chose to record lines over the first two of these choruses. As mentioned earlier, Dexter's lines are relaxed and flowing. Most of the interaction coming from Larry Marable's drums is placed on the snare drum throughout this track. He and bassist Leroy Vinnegar play supporting roles to the solos of Gordon and pianist Kenny Drew.

Drew's three choruses (2:55-4:59) seem to draw on Gordon's sense of phrasing. During the bass walking (solo) of one chorus (4:55-5:38), it is notable to listen to how Marable stays out of the way, while remaining on the ride cymbal, playing very lightly.

The two choruses of 4's with the drums are instructive (5:38-7:00) in that they are fluid snare drum-oriented lines featuring lots of triplets with metered closed rolls in-between accents. There are also some nice antecedent-consequent phrases of 2 bars of one idea, with a response of 2 bars of exact repetition or another closely related idea.

The head out (7:00-7:41) follows the 4's section, and the 8-bar outro uses same material as the intro. As an arrangement, this fits the construction of many be-bop tunes of the 1940's and '50's, the primary focus being on the solo choruses, with simple intro/outro material, and giving everyone a chance to blow.